In August 2018 we celebrated the diverse life in our seas, encouraged people to take care of their beaches, took part in an historic event and provided updates on our enforcement activities. Learn more about our work: 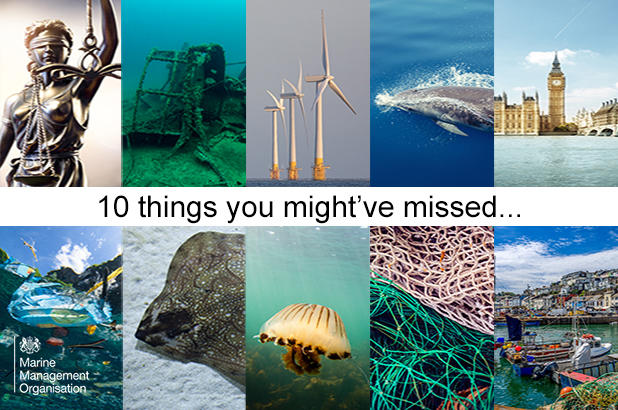 We supported the ‘Bin It 4 Beaches’ campaign to coincide with the August Bank Holiday weekend, when an estimated 5.9 million adults were due to visit the seaside. As part of this we shared facts and statistics highlighting the problem of people leaving their rubbish behind at the beach.

People are most likely to litter when there is rubbish already in the area. If you're heading to the seaside this weekend #binit4beaches pic.twitter.com/cTSkZcjupj

We provided early warning on forthcoming regulations affecting the UK fishing industry and explained what the MMO is doing to raise awareness and provide guidance. UK fishermen will still need to comply with the changes despite the UK leaving EU. This is because the Government will be bringing EU rules into UK law as ‘retained EU law’ and so existing fisheries arrangements will continue to operate in the period following the UK leaving the EU.

We provided updates on the outcome of court proceedings for fisheries offences. A Plymouth fisherman was ordered to pay over £22,000 for offences relating to pollock. involving illegally caught bass and an East Sussex fisherman received a fine of £4,699 plus £3,200 costs for illegal bass fishing.

We announced a small amount of quota was available for bycatch of undulate rays in the Eastern English Channel, and consulted the Shark Trust on our explanation of this.

The Wildlife Trusts’ National Marine Week took place in early August. We marked this by sharing marine-related facts and statistics via our social media accounts. Our post about jellyfish was particularly popular:

A group of jellyfish is called a 'smack' - 6 species are commonly found in UK waters. Only about 5% of their bodies are solid matter, the rest is water. Learn more about them here: https://t.co/er0T64exEh via @thembauk #nationalmarineweek pic.twitter.com/T36CS6EGEM

From 1 September 2018 fees and charges related to marine licensing applications changed. We notified applicants who were likely to be affected by the changes and updated our website.

We provided an update on the outcome of our court case where we took legal action against a Dutch company which removed items from a shipwreck off the South West coast of England without appropriate permissions.

The Suffrage Flag visited our Newcastle office on Monday 13 August as part of its relay around UK civil service to mark 100 years of women getting the vote. Jayne Wilson from our legal team explained how we celebrated being part of this historic event:

We issued a request for researchers to tender for an evidence project around evaluating and advancing methodologies to validate the origin and method of caption of fish. You can find out more about our evidence requirements and priorities via our website.