The Marine Licensing team often carries out interchange sessions with customers and organisations with an interest in our work.

This gives us an opportunity to learn more about how each other operate and strengthens relationships.

As part of this approach, members of the licensing team attended an interchange day with representatives from the marine aggregates industry, including British Marine Aggregates Producers Association (BMAPA), CEMEX UK Marine Ltd and Tarmac Marine Ltd.

The team were warmly welcomed on-board the ‘Sand Falcon’ dredger at the Port of Jarrow in the morning by the crew and were shown the vessel unloading its cargo. After a spot of breakfast the team were given a tour of the vessel by the Captain and First Mate. The tour showed all aspects of the ship including below deck quarters, engine room and a closer look at the draghead of the dredger.

The ship’s navigation systems were demonstrated, enabling us to understand how some marine licensing requirements are fulfilled. 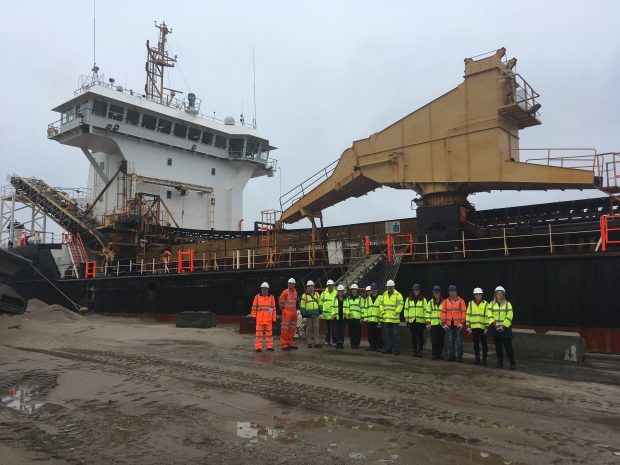 After the visit to the dredger, the team and representatives of industry returned back to the office for lunch and to undertake a workshop. Representatives from industry gave presentations on the importance of marine aggregate extraction. Many land based sand and gravel sources are becoming exhausted or increasingly difficult to extract. This, combined with pressure from large construction projects across the UK means marine aggregates are at the forefront of construction. In 2015, 76% of marine aggregates landed in England and Wales were used by the UK building industry and approximately 85 km² of the seabed was dredged, which is only 0.01% of the UK continental shelf! 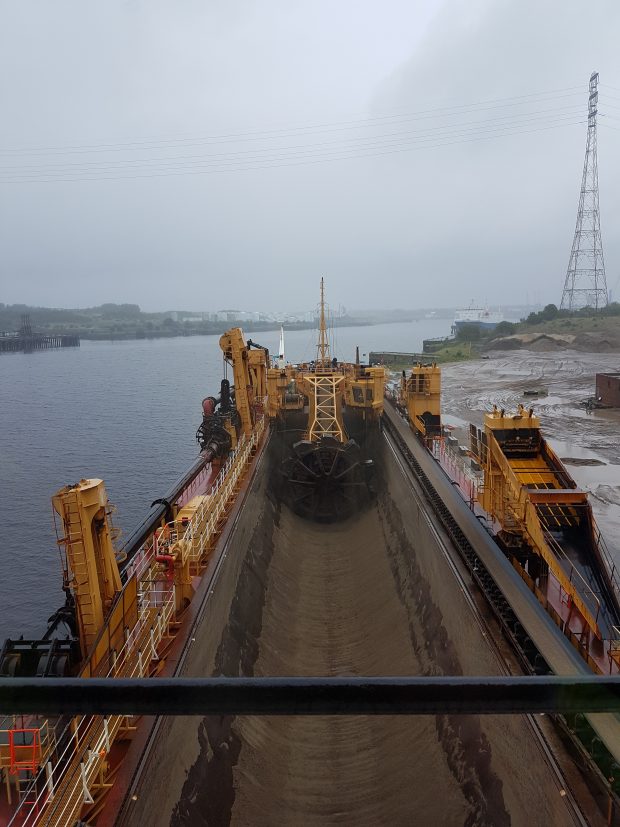 Another presentation included the operational processes involved in extracting the aggregate through the draghead, which is typically 1.5-3m wide. The presentation also referenced environmental conditions and the role they play in ensuring the environmental impact is minimised.

The final presentation considered the geological processes involved in the formation of aggregate resources, how industry identifies where to dredge and plans for future development. Most deposits were formed over 20,000 years ago when glaciers covered the North of the UK and 11,000 years ago, when the land bridge (Doggerbank) connected the UK to mainland Europe. During this period, gravel bed rivers were submerged and preserved. To identify where to dredge, companies use different tools such as admiralty maps, British Geological Survey study (funded by The Crown Estate), previous scientific studies and commissioned surveys. An example is a sub-bottom profiler which generates a cross section through the seabed and can identify the type of sediment and the changes in sediment with depth.

The presentations and subsequent discussions were useful to all in providing a general overview of the sector, especially to Case Officers not within the Aggregates, Cables and Historic Environment sector. Additionally the workshop was an excellent opportunity to further our relations with representatives from industry and encourage closer working between the licensing team and industry.

The licensing team would like to thank the representatives from industry for organising the interchange, sharing their knowledge and for their time to visit Newcastle.