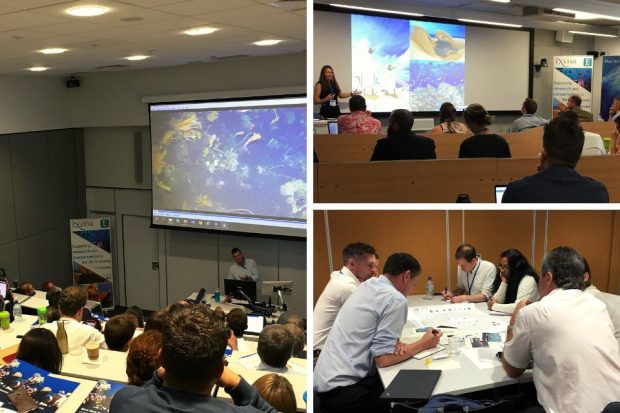 Attendees travelled from around the world to discuss big ocean management at the University of Exeter’s Cornwall Campus. The symposium provided an opportunity for collaboration between the various agencies and organisations involved in delivering the UK government’s Blue Belt Programme.  The group reflected on the programme’s progress and learned from best practice developed elsewhere in the world.

After keynote presentations from Aulani Wilhelm on the challenges of ocean-scale conservation and Kylie Bamford on delivering a Blue Belt for the UKOTs attendees heard from UKOT representatives working in Ascension Island, St Helena, Tristan da Cunha and South Georgia and the South Sandwich Islands. Diane Baum, Rhys Hobbs, Stephanie Martin and Sue Gregory discussed the significance of their marine environments and the challenges they face, highlighting the key achievements of the Blue Belt Programme.

The symposium allowed us to showcase the amazing work that has been taking place on Ascension through the Blue Belt Programme and Darwin Plus ASIOS project, which has provided us with the information and confidence to designate one of the world’s largest Marine Protected Areas (MPAs).

More importantly the event helped us to prepare for the even greater challenge of managing such a huge area of ocean. UKOTs often look to the UK for management models, but for large-scale marine conservation we need to think globally to find that expertise. Hearing experiences from established MPAs in Hawaii and Australia and other UKOTs was inspiring and reassuring. The challenges haven’t become any smaller, but I know we will become part of a global network trying to solve them together.

It was great to be able to talk about the success that St Helena has had under the Blue Belt Programme so far and showcase the great work the team has been doing do protect the marine environment.

It was also beneficial to hear about the work done in other Overseas Territories, countries and organisations elsewhere in the world, some whom are much more established in managing their marine environments. The opportunity to learn about their successes, how they have approached things (including any lessons learned) was invaluable and putting faces to those names has helped to make dialogues and networking much easier since the symposium.

The Blue Belt workshop was an excellent opportunity to meet so many dedicated people working for and on projects in the Overseas Territories. It was incredibly valuable to learn about the many things we have in common and to work together to resolve the challenges each remote island community shares.

Day 2 – science and management across the UK Overseas Territories

The second day of the symposium took a broader view of marine science already taking place in the UKOTs. Speakers from NGOs, research institutions and government shared case studies and best practice of integrated science and management.

There were 12 talks during the day from speakers around the world. Jessica Meeuwig, Heather Koldewey, Martin Collins and Alan Friedlander provided an insight into ongoing work from around the globe and offered their views on the key questions facing big ocean management.

During one of the presentations Blue Belt Programme’s Paul Whomersley described the importance of, and need for, robust scientific evidence during the design and management phases of MPAs:

You can’t design, designate or manage a MPA without the evidence to back it up. The recent marine surveys on the RRS Discovery, in addition to other scientific work carried out under the auspices of the Blue Belt Programme, will help provide us with the necessary information to successfully manage these important environments into the future.

The afternoon talks focused on the practical tools available to monitor the biological and social impacts of large scale MPAs. The day finished with a discussion on how to measure the impact of large, remote MPAs in the UKOTs chaired by Blue Belt’s Oli Yates. 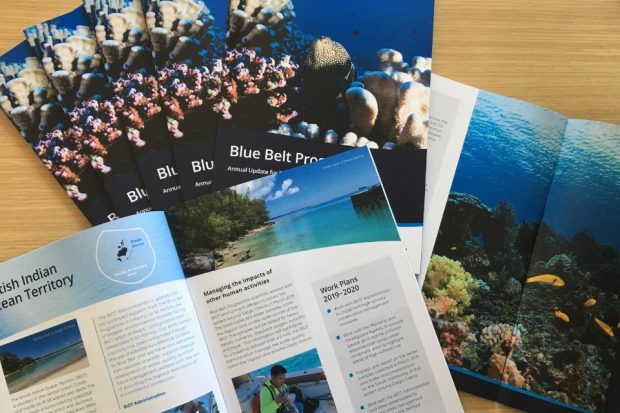 Communications were a key focus of the symposium with copies of the recently launched Blue Belt Annual Update 2018/19 distributed at the event. The conference hashtag #BlueBeltSymposium generated over 700 tweets and retweets and original tweets from the Blue Belt Programme twitter account made nearly 42,000 impressions.

The final day of the symposium focused on one of the greatest challenges facing small UKOT governments – compliance and enforcement. There were several talks from Global Fishing Watch, Ocean Mind, Zoological Society London (ZSL) and Blue Belt Programme’s Dan Ward Sarah Keynes, Katie McPherson and Kimberly Proud from the MMO.

Dan’s talk explored the practical applications of satellite-based approaches to compliance and enforcement. Whilst Sarah, Katie and Kimberley’s talks focussed on some of the novel technologies in the pipeline and the legal frameworks surrounding enforcement.

The session finished with a workshop on how best to develop and implement fisheries monitoring, control and surveillance frameworks within OT management zones, led by Blue Belt’s Katie McPherson.

University of Exeter’s Sam Weber, who organised and coordinated the event alongside Nicola Weber, said:

The symposium was a fantastic three days of presentations, workshops and networking opportunities. We are indebted to the many people who made it happen and those who travelled from around the world to participate. There was a real energy in the room by the end of the final day, with ideas flying and new collaborations and partnerships forming.

We hope that this momentum carries forward and that this is the first of many such meetings where the UKOT marine management community can come together to build on future successes and find solutions to shared challenges.

The Blue Belt Symposium was jointly held by the Ascension Island Government, the University of Exeter, Great British Oceans coalition, the UK government’s Blue Belt Programme with funding from the Darwin Initiative. Grateful acknowledgement is given to University of Exeter’s Sam and Nicola Weber who coordinated this event. View our twitter highlights  from the symposium or search #BlueBeltSymposium.

The Blue Belt Programme supports the delivery of the UK Government’s commitment to enhance marine protection for over four million square kilometres of marine environment across the UK Overseas Territories (UKOTs). It is delivered by Cefas and the MMO.

To find out more on the Blue Belt programme: